You have seen Hollywood celebrities use it on Dancing with the Stars, you have heard Dr. Oz talk about it on his show as a safe and effective way to relieve pain and speed up injury recovery. Whole Body Cryotherapy is the process, originally conceived for arthritis pain management decades ago, that is usually conducted in a special cryotherapy equipment. Let’s take a look at what this equipment is and how it works.

There are two types of cryotherapy equipment – a cryo chamber that is similar to a traditional sauna occurring in a room where persons wearing garments to protect from frostbite enter just like they would one stockpiled with lava rocks, and another that resembles more a stand up tanning bed that encapsulates an individual while leaving their head exposed above the unit. In most applications, liquid nitrogen (or cooled compressed air) is then pumped into the cryo chamber, which rapidly reduces the temperature of the skin’s surface enough to prompt internal healing responses. These include releasing endorphins for immediate pain relief, prompting immune responses in defense of the external stimuli and numbing pain recepting nerves. Initially, the benefits of cryotherapy are short term, with the most powerful effects being evident for a few hours after treatment (usually up to 6 hours). But, longer term effects are observed in many individuals for weeks following. The process of supercooling the skin’s surface for the sake of pain relief has been proven effective for a wide range of health conditions, and its used as a treatment for osteoporosis and arthritis, used for recovery time in athletes, and even being explored as an effective natural treatment for eczema and other skin conditions. For all of these positive results however, there may still be some concerns about cryotherapy side effects, and some individuals are well warranted in their hesitation. Read this article to learn more about contraindications and the safest way to avoid any unlikely side effects, including protective footwear. 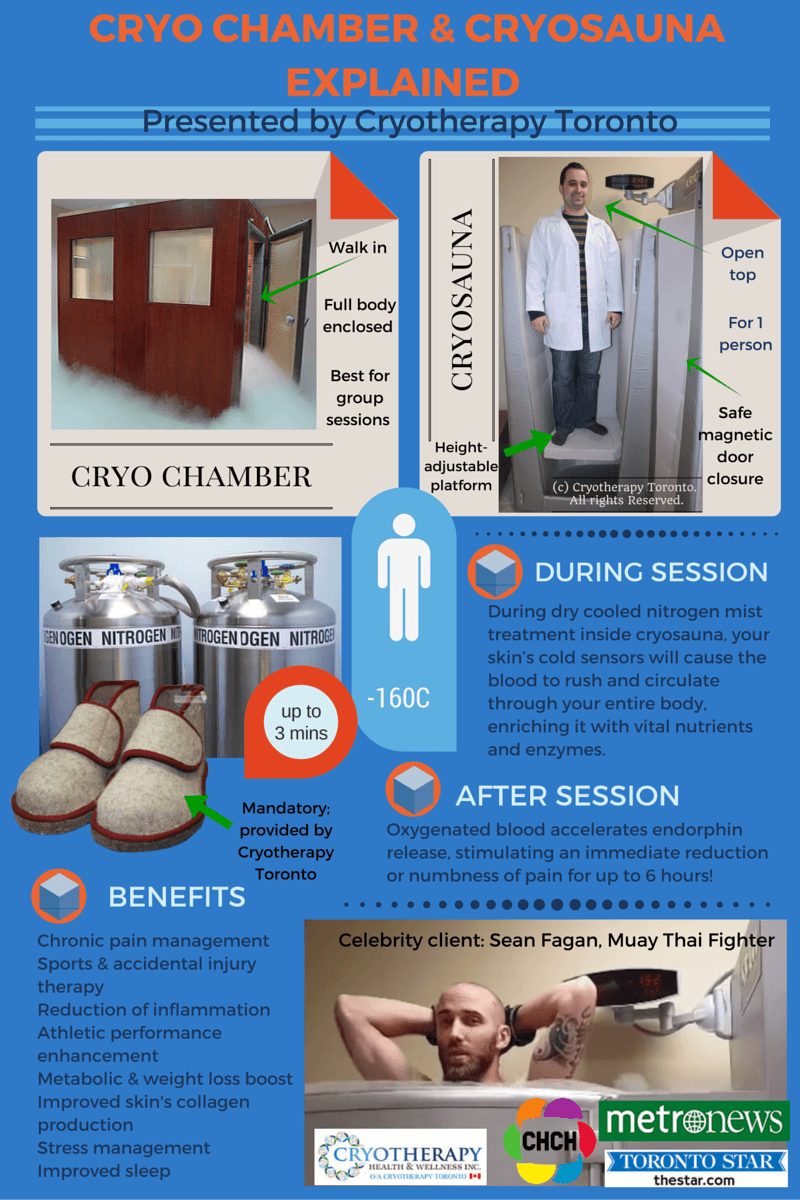 Cryo saunas are becoming increasingly popular thanks to both the media and cutting edge medical research. Athletes worldwide have found that cold therapy can dramatically improve recovery time following an event or training and that it’s also very effective for speeding healing following an injury. Elite sports teams in the US actually own a cryo chamber or a cryotherapy sauna so that the athletes can have easy access to the healing treatments right after practice or after a game. The cold therapy is becoming more and more popular in Canada, too. And although it is still somewhat uncommon to find cryotherapy equipment at many sports injury clinic Toronto locations, the increasing awareness about cold therapy saunas has produced noticeable results. Cryotherapy equipment is now available to the general public in Toronto, as well as in the surrounding region and reaching southward.

Recent research has found that while cryotherapy was initially developed for various types of chronic pain management, it’s uses may reach far beyond joint and muscle pain. Cryo skin treatment for uncomfortable conditions like psoriasis and eczema have been extremely successful, adding more excitement to the repertoire of uses for the natural and low risk procedure. However, while the cost of cryotherapy and its problematic relationship with the health insurance industry may keep some from giving it a try, the purportedly unknown factor in terms of cryotherapy side effects is what many people may be concerned about that keep them out of cryo saunas. The simple truth is that reputable clinics that employ skilled and trained practitioners make every effort to ensure the safe use of cryotherapy, and in otherwise healthy individuals, there is virtually no risk in freezing the pain away.