What Are Autoimmune Diseases That Can Be Helped With Cryotherapy Immune System Treatments?

We all have an immune system, a network of cells and organs that exist to differentiate which “bodies” and processes are part of you and which are essentially foreign “invaders”. Under certain conditions, some people experience sort of a “glitch in the system” where their body is unable to tell the difference between the two. This results in your body making autoantibodies that attack normal cells in error while the regulatory T cells that normally perform that “tell the difference” function, fail to do so, which results in your immune system being weakened and “attacked”. This causes the damage, or what call an autoimmune disease. With over 100 known types of such diseases, the body part(s) that get affected depend(s) on the type of the disease.

1. Autoimmune Diseases Are More Common Than You May Think.

Affecting over 23.5 million Americans with some conditions being common (such as Hashimoto’s disease among others) and some rare,  autoimmune diseases are one of the leading causes of death and disability.

2. Some People Are More Predisposed and Affected Than Others.

While autoimmune diseases can technically affect almost anyone, the following groups of people are at greater risk.

Whole Body Cryotherapy has shown success in reducing discomfort and pain symptoms associated with autoimmune diseases, as well as overall immune system boost that promotes faster healing. The fact that humans have evolved from the glacial (ice age), the genetic adaptation to cold is the likely in-depth reason that cryotherapy immune system treatments are able to induce homeostatic responses from our bodies’ regulatory mechanisms.

After checking the list of contraindications and signing the consent form, the patient wearing dry socks, special booties, gloves and underwear, gets into the pre-cooled and dried cryosauna. Its floor elevates allowing the patient’s head to be outside of the capsule-looking machine so that he/she can continue to breath room air without the risk of a frostbite.

During a session, bursts of gasiform liquid nitrogen are circulated around the cryosauna, directed away from the user’s skin. The cold bursts have a purpose of maintaining the therapeutic temperature at the right level. In a typical 2 or 3 minute session, 10-second bursts are released with 20-30 second pauses between them. The temperature in the cryosauna (or a cryogenic chamber depending on the cryotherapy center you go to) is maintained at about 10 degrees Celcius throughout the course of cryotherapy immune system treatment.

Older, less physically active WBC users with autoimmune diseases, or those with severe aches or less tolerant of cold, can achieve a plausible immune system boost response with a slightly milder treatment plan consisting of shorter duration of cryosauna sessions. Our cryotherapist Roman can adjust the amount of pre-cooling, liquid nitrogen bursts during session, and the duration of the session, to achieve the desired brief shiver reflex without the cold being too intense for the patient. However, after undergoing a series of treatments, most people usually switch to colder treatments as they progress. 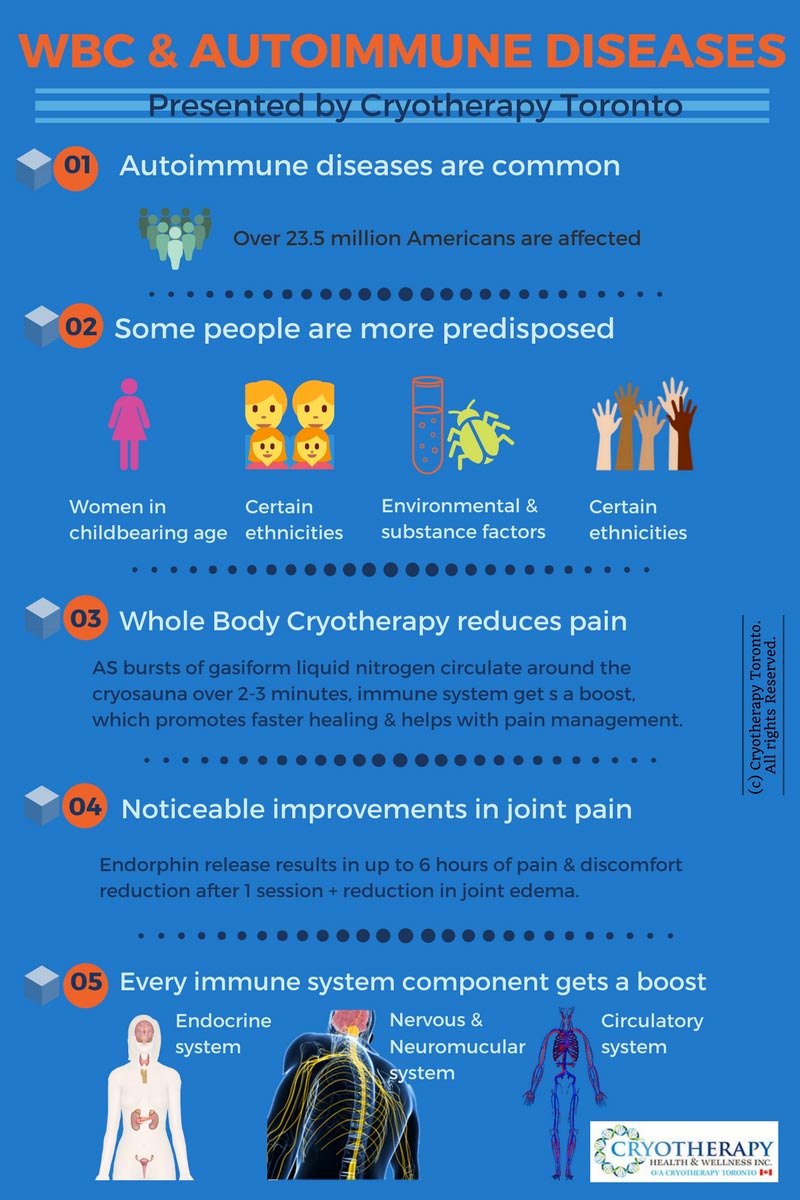 5. Improvements in Pain in Joints and Muscles Begin Immediately.

Immediately after even the very first 2 – 3-minute Cryotherapy immune system boosting session, the majority of our Cryotherapy Toronto clients experience noticeable improvements in pain and joint discomfort that lasts for several hours. A reduction in joint edema is also notable. Most often, customers also generally experience an endorphin release that otherwise would typically be experienced after intense exercise.

6. Every Immune System Component Gets a Boost.

The circulatory system then undergoes a dramatic peripheral vasoconstriction followed by strong rebound vasodilation. Due to vascular permeability, the peripheral vascular tone gets improved while reducing histamine release.

The neuromuscular system’s response leads to a decrease in troponin I, edema and creatine kinase.